It’s rare to see a first-year player thrive so much in the NBA playoffs. It’s a place where the inexperienced get exposed on national television, and the lights become too bright for even some of the league’s best players. For rookie Tyler Herro, his play mirrors the poise and productivity of a player that’s seen it all. Alongside teammate Jimmy Butler, the former Kentucky Wildcat has emerged as one of the Miami Heat’s most reliable players and one of the league’s best three-point shooters already.

Since Dwyane Wade, he is the first Miami rookie to score 10+ points in ten straight games in the playoffs. It seems like players today accelerated their progression rate compared to previous generations by a notable margin. For this upcoming young star, he’s proving that he’s more than ready to play hero ball when his team needs it most. He’s only getting better as the pressure rises. 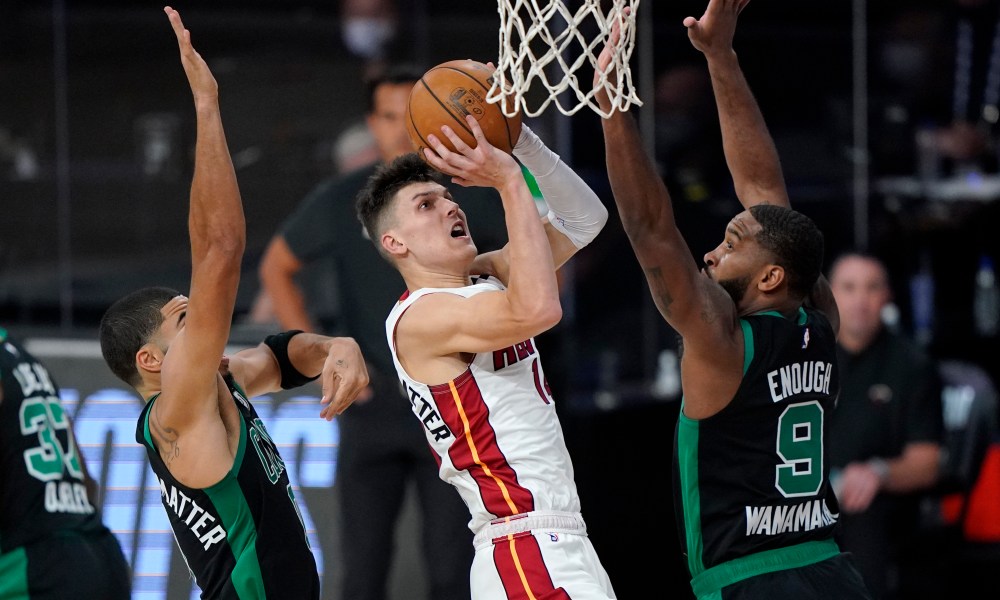 A Super Herro With The Basketball

In game one against the Boston Celtics, he put up 12 points, 11 rebounds, and nine assists off the bench. As Duncan Robinson struggled with foul trouble all night long, Herro needed to step up against the number one defense in these playoffs.

He connected on some significant shots in crunch time that sparked Miami’s win. The way he runs without the ball and gets to his spot off of screens is very Steph Curry like. But Curry didn’t display this sense of basketball IQ in the playoffs his rookie season.

As a premier sharpshooter, the Heat guard is also averaging an efficient 40% from beyond the arc and is a +5 consistently.

Head Coach Erik Spoelstra also took a quick liking to his play, putting him in those do-or-die situations where Herro has repeatedly proven to execute, shooting the ball with undeniable confidence.

Butler has high praise for the 20-year-old sensation. He stated in a press conference after Game 1, “He be out there hoopin’. He’s comfortable, he’s confident. We continue to tell him to be that way. No matter what game we’re in…He’s been preparing for this moment, all year long. There’s nothing that we’re not comfortable with him doing, and he shows up. Day after day, night after night.” But the Celtics are no scrubs. Tyler Herro will need to keep playing this level of basketball. He needs to use his full potential if he wants to see his team advance to the finals for the first time since 2014.

As these playoffs are showing, nothing is guaranteed.

Game two is on Thursday.

Post Views: 55
About Henry Curi 27 Articles
Henry is a passionate sports content creator originally from Cochabamba, Bolivia. He grew up a die hard Boston Celtics fan and has immersed himself in the world of sports as a whole. He has limitless capacity to bring sports fans and beyond, content that they can not only enjoy, but really resonate with. Henry is more than just a sports writer, he is a storyteller. One that looks to redefine the norms and make something special for everyone.

The Butler Is Doing It