When it comes to honesty and candidness, WNBA star Imani McGee-Stafford is as authentic as you can get. 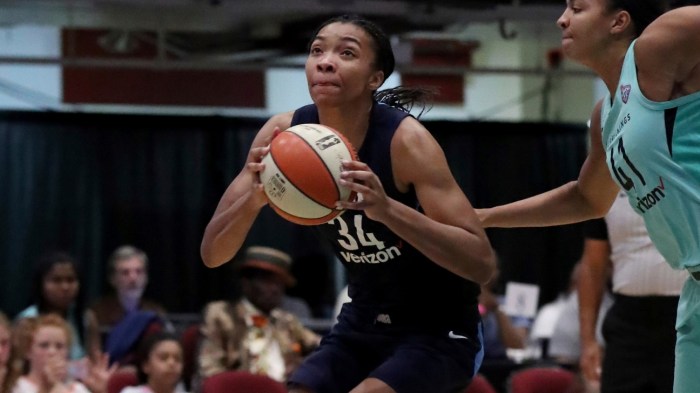 On and off the court, she is a true renaissance woman, refusing to be limited by society’s expectations of athletes.

Playing for teams such as the Chicago Sky, Atlanta Dream, and most recently the Dallas Wings, has not kept Imani from becoming a voice of change for so many.

She has been outspoken on issues from sexual violence to mental wellness, sharing her story of survival and struggle.

Imani is not shy about speaking her truth and the most recent events of racial injustice have amplified her to continue using her voice.

But she is very clear that she intends to do so on her own terms.

“Protesting is not my activism, you won’t see me at a march. I am a reader and I can share resources” she said.

Imani is adamant about athletes who speak up to do so in a way that works for them and not be manipulated by others into doing anything different.

“Be involved to the best of your abilities, don’t feel there is this pressure” she said.

She speaks of the fact that some in society hold up athletes and popular culture icons to a certain level of accountability that is not given to those with institutional power.

Even as we praise athletes and others for using their platform as part of a great tradition, we must balance that with ensuring that those who hold positions of political, social, and legal power are held to a much greater standard.

Athletes can be part of the effort in pushing for change.

“I do see it getting stronger, athletes are being accepted into this role,” Imani said.

Around this time, she is working on finding her place on another court.

A court of law.

Imani has taken the next two WNBA seasons off to pursue a law degree at Southwestern University in her home state of California.

She intends on becoming a research lawyer working on the issues that are near and dear to her specifically women’s rights, sexual violence, and mental health.

She is fitting in well with an amazing sorority of WNBA players who are becoming more known for their advocacy than their athleticism.

The future for Imani McGee Stafford is as bright as the California sunshine that she was raised under.

She is unapologetically herself and holds firm to her principles and she will continue to take that with her from the hardwood to the courtroom.