The NCAA is shaking in their boots and it is a beautiful thing to see.

College athletes are leveraging their power in unprecedented ways that have shaken the foundation of the exploitative system that is college athletics.

The COVID-19 pandemic and the resurgence of the Black Lives Matter movement has compelled college athletes to take matters into their own hands and to utilize the tools of basic organizing that forced the major universities and conferences into a corner of a long-overdue reckoning.

Starting with the Pac 12 which includes some big names such as UCLA and USC, players have put forward a list of specific demands that tackle issues of racial, economic, and health justice.

Their demands are expressed in the Player’s Tribune and with the hashtag #WeAreUnited.  https://www.theplayerstribune.com/en-us/articles/pac-12-players-covid-19-statement-football-season

This is an extraordinary moment where college athletes are literally putting everything on the line for their dignity that can potentially challenge the whole paradigm of college athletics itself.

Dr. Emmett Gill, founder of the Alliance of Social Workers in Sports and the University of Texas at Austin Professor foresees this as leading to a leading a delay of college football until athletes are recognized under federal labor laws.

“I believe that if all P5 conferences adopt this movement that there will not be college football until there is NIL with a free market foundation.”

One of his predictions came true as the Pac 12 and Big Ten announced that they will be canceling their games this season in part due to a lack of preparation and strategy to combat COVID-19.

If any institution should be blamed for an absence of leadership other than the White House, it is the NCAA.

This problem dates back for centuries but we can say as recently as 2014 when the Northwestern University Football Team requested to form a union.

Their request was picked up by the National Labor Relations Board and although a regional director declared that the athletes were employees who deserved compensation under the law, the NLRB in DC declined due to a perspective that varying state laws pertaining to unionization didn’t allow them to cover Northwestern and not other universities.

It was a tremendous blow and a set back for college athletes, but the Pac 12 and Big Ten players are taking up the mantle and are determined to let their presence be recognized and their concerns legitimized.

Now they have formed an alliance with the #WeWantToPlay movement lead by players such as Clemson’s QB Trevor Lawrence who have expressed sentiments of a strong desire to come back and play. 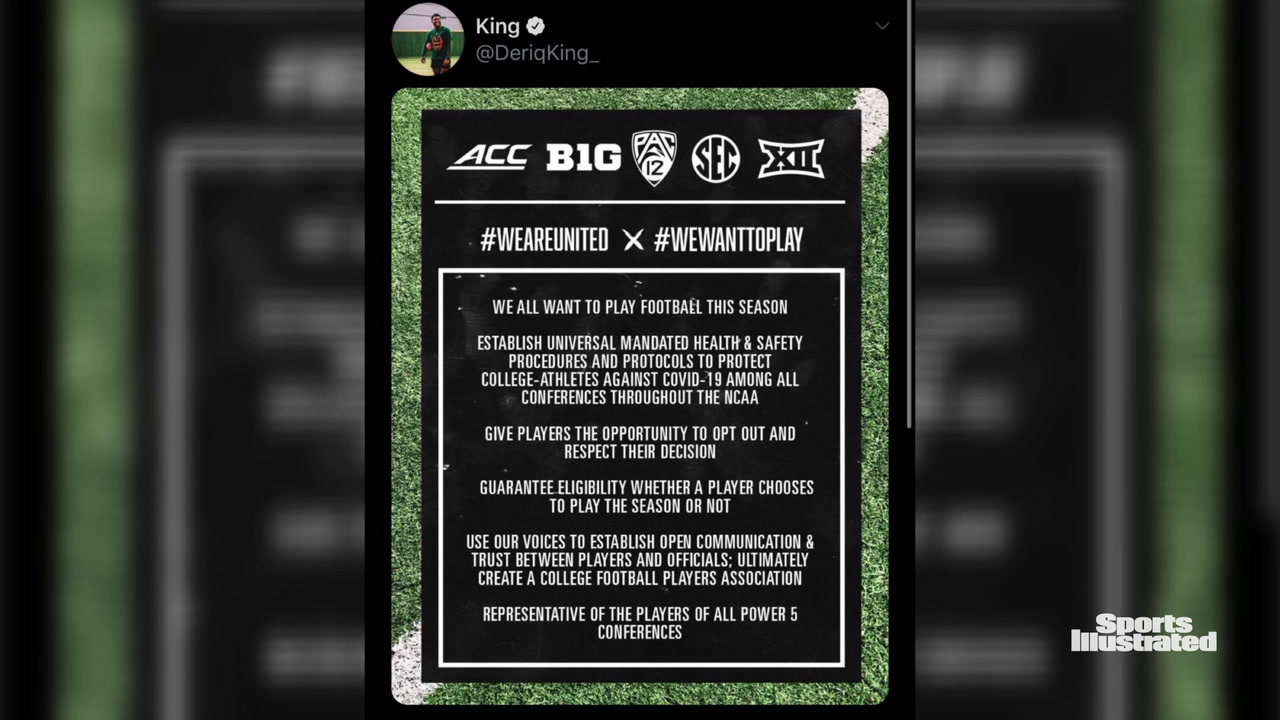 This is the kind of solidarity that could change the trajectory of college sports for years to come.

“I am excited that both movements will join forces. I believe that one critical element is that the groups streamline their demands into one agenda. Another critical element is that if the college football season is postponed that the groups remain vigilant in their work because sustainability has always been a critical factor in college athlete activism. These groups should make sure they help conference commissioners understand just because you delay the college football season until the spring does not mean we can’t shut it down until you address our concerns.”

And while the #WeWantToPlay movement has garnered attention from certain pundits and political figures, let’s remain skeptical about their motives.

These are the same people who have been against college athletes being compensated for their labor and who are in close contact with structural and institutional forces that seek to keep athletes in a state of destitute.

We can also not forget the obvious elephant in the room.

Race plays a major role in how we perceive the issue and the fact that predominately white institutions (PWIs) with overwhelmingly white administration profits of the unpaid labor off of a majority-black college athlete population speaks volumes to what kind of system is in place.

These same people supporting Trevor Lawrence are the ones who consciously and/or unconsciously engage in white supremacist sensibilities.

They cheer for black athletes when they are on the field, enriching the elite and making them feel comfortable in their ignorance on race and racism, but once they are off the field, they couldn’t care less.

After all, this is the crowd that says “shut up and dribble” and “stick to sports” as well as questioning the intelligence of athletes.

Whatever happens from here is unknown, but the old way is no longer working, and today’s generation of college athletes are following in a rich tradition (Wyoming 14 1969, UNC 4 1992, Missouri 2015, etc.) that will shake everything up.

They mean business and their dignity is what counts.